EYP designs and modernizes facilities that honor the service, dedication, and sacrifice of those who promote the mission of the US Navy to train and equip forces that maintain freedom of the seas. Our in-house expertise in energy efficiency, historic preservation, and building modernization help keep the Navy’s facilities ready to accommodate both current and future program and technological needs. We have helped the Navy adapt and modernize existing structures to extend the useful building life of their diverse portfolio of historic structures, including ceremonial spaces, former posts, and training facilities.

About the US Navy

The US Navy traces its origin to the Revolutionary War, during which the Second Continental Congress authorized the purchase of two ships to be armed for a cruise. Nearly 250 years later, the Navy has grown from a two-ship wooden fleet to an overwhelming array of the world’s most technological advanced and powerful aircraft carriers, submarines, and battle ships that patrol the seas to safeguard the nation and its allies.

The restored facility is the heart of a National Historic Landmark District.

Highly secure command and control capabilities protect the skies over our nation's capital.

The guard house, where Abraham Lincoln made the last official visit of his presidency, has been restored and returned to its original site. 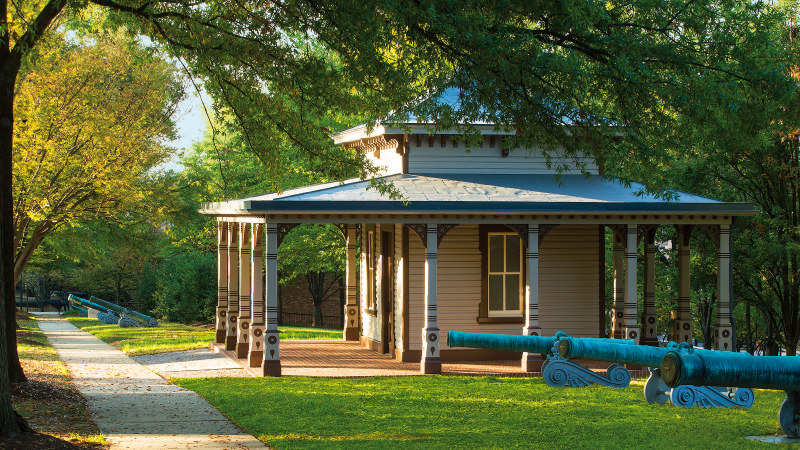 The Washington Navy Yard recently reclaimed a piece of its illustrious past with the restoration of the Watch Box, a small, wood-framed Victorian building that served as a sentry post beginning in the 1850s. President Abraham Lincoln visited the Navy Yard late in the day on April 14, 1865, most likely making the Watch Box one of his last official stops before his fateful visit to Ford's Theatre that evening. More

W.F. Magann Corporation was subcontracted by Summit Construction to assist in relocating the Watch Box, a historic structure at NSF Indian Head (a naval research facility in Maryland) that once guarded the Washington Navy Yard during the Civil War.

A historic structure that Abraham Lincoln would often visit, the Watch Box played a vital role in keeping the Navy Yard secure and it remains to this day as the only surviving example from that period of time. As part of the 150th anniversary of the end of the Civil War, the Navy decided to restore the structure and return it the Navy Yard where it originally belonged.

To complete the job, Ayers House Movers, another subcontracted construction company, needed to lift the structure from its foundation and move it to the waterfront, where W.F. Magann Corporation would load it onto their barge and float it up the river to the Washington Navy Shipyard.  Upon arrival in Washington D.C, the Watch Box would need to be loaded back on land for Ayers to transport inside the shipyard.

But of course, there were challenges to be had along the way.

A complex relocation and restoration effort has returned the guard house to its original site, so that it can help educate visitors about the Civil War. We partnered with the Navy and Summit Construction to coordinate the complex transport.

Nearly 150 years after President Abraham Lincoln came to the Washington Navy Yard to visit his friend, Yard Commander Rear Adm. John Dahlgren, the same Watch Box he passed through and checked in at was returned to the Navy Yard, April 16.

With support from Naval Facilities Engineering Command (NAVFAC) Washington, the historic Watch Box, originally built in 1853-1854, was moved back to the Navy Yard after spending more than 100 years at Naval Support Facilities (NSF) Indian Head.