Divergence in the School of Athens: how a Renaissance fresco informs design in the 21st Century 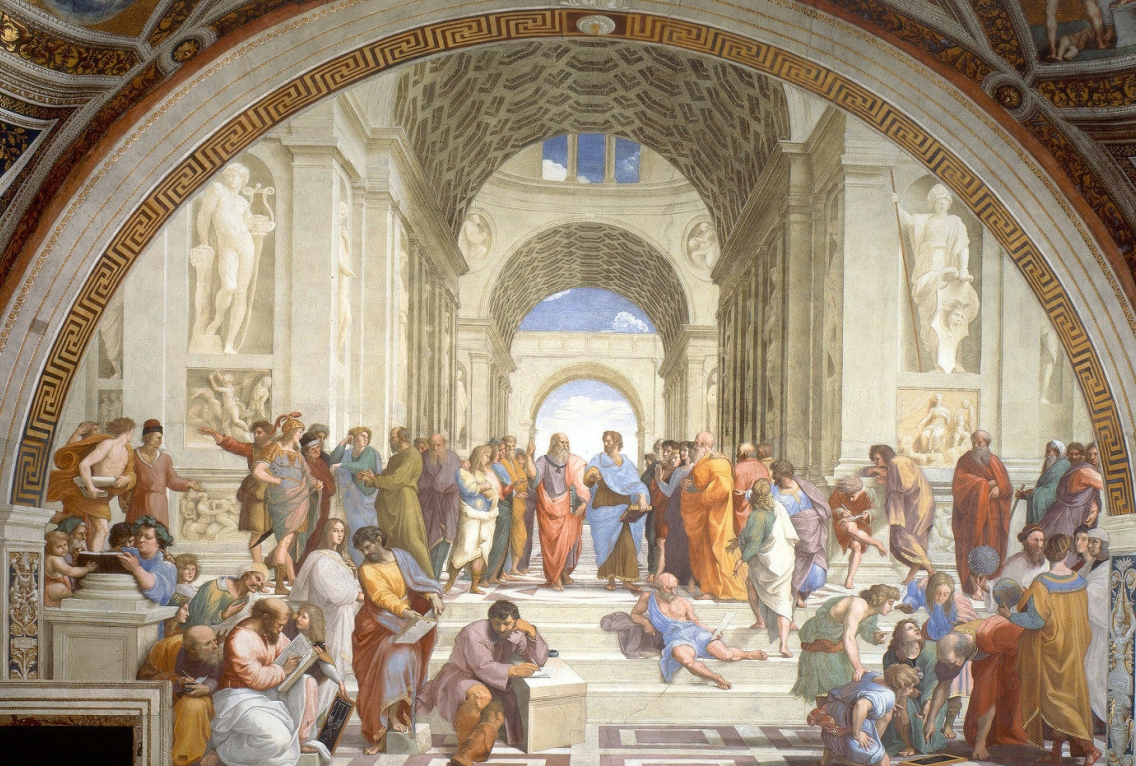 Recently, a prospective client described their project’s prospect as a transformation of a 1970’s brutalist building into a contemporary center for research and learning. This formidable task also included the desire to create environments more reflective of an increasingly diverse body of students and faculty. Two important current trend at academic institutions are the ongoing embrace of the concepts of “convergence” in the sciences, and an increasing awareness that Artificial Intelligence is growing and infiltrating many aspects of our personal and work lives. How can designers successfully work to reconcile the seemingly disparate tasks of simultaneously creating environments that encourage intellectual discourse, sustain a feeling of wellness and safety, welcome people from a variety of backgrounds and life experience, and encourage collaboration and discovery?

Raphael’s fresco Scuola di Atena, painted towards the end of the first decade of the 16th century, was a commission to decorate a palazzo, and is believed to have been the third work he completed at the site, following La Disuta (Theology) and Parnassus (Literature). According to Horst and Anthony Janson’s History of Art, this work is not only Raphael’s masterpiece, it embodies the classical spirit of the Renaissance.

Remarkable in character and relevant for designers today, is that Raphael brought together a range of both human activities and personalities under the (figurative) umbrella or tondo of “Causarum Cognito” – effectively what we now recognize as “co-factors” or contributing causes influencing outcomes, and which Aristotle emphasized in his theory that wisdom is knowing “why”.

There is speculation among art historians regarding the figures Raphael deployed in this freeze, and hypothesis have been advanced regarding the specific identities of the figures, including, for example, Socrates, whose striking resemblance to his depiction in classical busts seems familiar, but with others, there is less certainty. However, the scene visually describes a variety of activities, from passively listening to lecture to the vigorous display of rhetorical gestures. Even more curious are the activities displayed in the work, from pondering a sphere to using a compass on a slate which, to our contemporary experience, conjures the image of a touchscreen pad.

The range of activities, whether an engaged group, a focused individual, or some combination of those who are engaged and those disengaged, is that, collectively, they are contained in an architectural framework that is both Roman in expression, a series of circular forms, and offers connection to the exterior world through vistas of clouds and sky. The depiction of intellectual discourse as polyphony, rather than cacophony, suggests that that the artist’s mythological juxtaposition of a number of philosophers represents a treatise or manifestation that is somehow an aspiration toward a higher knowledge or reason. What lessons then, does the fresco offer the contemporary designer? Does this historical, allegorical work portend some specific suggestions worth consideration over 500 years later?

One takeaway from the fresco is that higher, shared aspiration is not, necessarily, a harmonious discourse. In fact, it may be anything but. Encouraging and abetting difference appears at the foundation of the fresco, but it isn’t a conflict of warfare or destruction. Rather, it is the value placed on the exchange of differing ideas and opinions that sustains and animates the gathering. How then, can our buildings encourage and promote exchange that is both experientially and intellectually challenging? One can converge toward a task, or work towards some new and greater synthesis, but the idea of convergence requires difference or divergence of opinion, knowledge, or observation to facilitate a move towards new discovery. Are the specific attributes that design can contribute encouraging a divergence in ways that are helpful, and what is “helpful” in divergent thinking or approaches to analysis and problem solving?

The marketplace of ideas has embraced “ideation” as a crucial step in the development process of Design Thinking. Creating safe environments that encourage the advancement of ideas is at the forefront of design for a wide range of project typologies, from academic and research to business. What is shared is the desire to encourage collaboration by providing accommodation for the softest voice amid the loudest and most blaring trumpets - how diverse and divergent voices are not only accommodated, but nurtured in the environments to gain participation and facilitate collective outcomes rather than cacophony.

Raphael’s School of Athens fresco provides some clues on what such a mythic environment needs for successful design. First, it’s a light filled, open, and highly comprehendible space, with openness, visibility, and transparency connecting both activity to activity and activities in contact with the world beyond. What is truly remarkable is the visibility and awareness of what others are doing, with an undeniable sense of self awareness and dramatic repose. The use of interior glazing can illuminate and elucidate modern-day meeting and work spaces to support a wide range of activities, just as an observer of the fresco can simultaneously consider the work as a larger whole, yet focus in on the specific activities of details in the work. Transparency in design allows us to provide acoustic isolation for groups to discuss and argue as fervently as in the fresco, while facilitating an overall peace and wellness within the overall structure. Life imitates art in this regard, in that a workplace, learning, or researchenvironment that simultaneously offers occupants the ability to be self-expressive, engaging, and self-aware, while allowing one to understand their position and place relative to others has the potential to be both grounding and elevating. How Aristotle and Plato are represented in the fresco, not only at the center of the work and near the vanishing point of the perspective, but also in that their physical representations, gestures and even the titles of the copies of the books they are carrying, simultaneously explores questions of space, time and change. Great spaces for teams to both be comfortable, yet motivated, are key to creating successful, engaging environments.

Similarly, the juxtaposition of happenings in the fresco are informative about the inter-relationships of program activities and the reasoning behind a right mix of these co-factors. While co-factors are contributory to outcomes, designing for juxtapositions of program elements to be complementary rather than conflicting is an important consideration. For example, the creation of breakout spaces where groups can gather and discuss issues near or within a short distance of instructional or programmed activity areas have potential to positively enhance both learning and research outcomes, make it convenient, comfortable, safe and accessible without a herculean effort to reach or use. The scale and arrangement of spaces not only have pragmatic or functional requirements, but also spiritual and/or philosophical needs to co-locate or co-factor the places to encourage “effective intellectual collisions” as part of the design concept. Not like a stage for puppets, but rather like the School of Athens fresco – the artful and pleasant exchange of exploration and discourse – as part of the design of the place itself.

Interestingly, the arches and cruciform plan of the setting of the School of Athens is not only reflective of architectural trends in the 16th century, but it also demonstrates for the interplay of forms and surfaces that help define place, and create void space where things can happen. While our explanations of why Raphael designed the architectural setting of this fresco would be speculative, it is worth mentioning that the arch surfaces that act as frames or portals to the activities deploy a decorative motif known as a meander, also known as a Greek fret or Greek key. The extent to which this thematic border implies or suggests that the intellectual journey of discovery and learning is linear or not, is again speculative, but the choice for the artist to use this motif suggests that the edges or framework of the intellectual experience, while defines, are not as simple as a smooth edge. In fact, the in and out convolutions of this pattern suggest a form or regularized irregularity – in that the boarders may vary, but the edge is, in fact, defined. Like eddies in a stream, a place that creates a see and be seen combination, with just enough seclusion to feel removed from circulation or traffic, allows discussion to flourish within a larger building context.

The desire, if not outright necessity of establishing our boundaries is at the very heart of deigning for divergence – in that the mix of approaches, opinions, and methodologies so needed in the process of ideation can exist within the boundaries we determine matter for our efforts. Safety means we may mark edges in our pursuits, but even these edges are somewhat loosely defined – not so much in terms of limits, but as zones. Design for Divergence not only places value on the diversity of approaches, it recognizes that accommodation of Divergence is an essential part of a holistic, safe and vibrant intellectual community. Like Scuola di Atena, our 21st century buildings can be wonderful places to constructively disagree, and collectively, the outcome from the larger endeavor reaches upward and well beyond the immediacy of our spaces, and towards a higher reason.